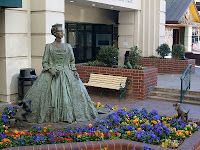 One of the first things people want to know when they take Charlotte's Longest-Running Daily City Tour by Queen City Tours is "Why is Charlotte called the Queen City?" The answer to that question is located at the corner of East 5th and North College Streets in Uptown Charlotte, North Carolina.

Charlotte Sophia was born in May of 1744 and at the young age of 17 married King George III of England in 1761 -- he was 23 years old. A year later in 1762, a new county was created from the larger Anson County, and it was named in honor of the queen’s birth place – Mecklenburg-Strelitz, today Mecklenburg Vorpommern Germany. It is located in the Northeast corner of Germany near the Baltic Sea. Six years later in 1768, part of the county of Mecklenburg was incorporated into a city and the General Assembly of North Carolina -- Along with Royal Governor William Tryon (Tryon Street) – wanted to flatter Charlotte’s husband – King George III – by deciding to name this new city after the king’s young-German-born wife – Charlotte.

The queen loved flowers and did a lot to start botanical gardens in Germany – Some still there today. She also loved dogs; there are two of the several hundred dogs that she had at one time depicted near her statue in Uptown Charlotte. She also loved children; she loved them so much that she had 15 of them! Nine of her children were boys, six of them where girls; two of them died as infants, and one as a young adult.

She is the grandmother of Queen Victoria who was reportedly between 46” and 51” tall, and the great-great-great-great grandmother of King George VI. He is the one who was married to Queen Elizabeth of England – We called her Queen Mum – who died in 2002. She is again the reason why Charlotte is called the Queen City and her crowns are represented on our street signs around town and largest crown atop the Bank of America tower.

Several years ago the Public Broadcasting Service (PBS) did a special on her ancestry and has uncovered proof that Charlotte was of African descant. It has been determined that she was directly descended from the Margarita de Castro y Sousa, a black branch of the Portuguese Royal House.
Posted by Jay Whipple at 4:00 AM

Do you prefer tours that tell both the good and bad history?

Jay Whipple
Charlotte, NC, United States
I have been a Tour Director, Conductor, and Developer since 1993. I have conducted more professionally-guided tours of the Charlotte area than any other person in the history of the Queen City. I have completed the most comprehensive college-level course on North Carolina History than any other area guide. The 96-hour course was administered by Dr. James Sasser, Professor Emeritus at Central Piedmont Community College in Charlotte. In addition, I have completed college-level courses in World History, American Literature, and African-American Studies. My job as a Tour Guide has allowed me to meet at least one person from every State in the U.S., and nearly 40 different countries. I look forward to sharing my experiences with you here and on our tours.